How Pentecostals Responded to the 1918 “Spanish Influenza” Pandemic

Lessons from Assemblies of God history

The whole world is feeling the effects of the COVID-19 pandemic. It seems like every institution in our society is closing to protect people from the spread of this virus. Many have commented on the Church’s response to this crisis from different angles. How should people of faith and who believe in healing handle this crisis? Should we cancel church? Should we stop ministry in the midst of a pandemic?

As a historian, what is interesting to me about the current pandemic is that it is taking place a little over a century after the devastating 1918 influenza pandemic, the so-called “Spanish Influenza.” From 1918 to 1919, an estimated 500 million people worldwide contracted what we now know as the H1N1 virus, and 50 million died as a result—675,000 in the United States alone. Knowing that this pandemic occurred in the early days of Pentecostal history, I decided to research how Spirit-filled believers in the Assemblies of God (AG) responded. It turns out they had a lot to say. 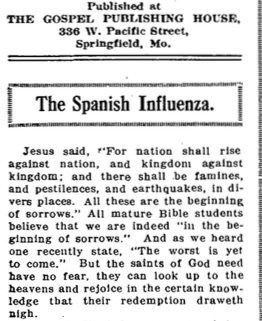 Beginning in 1918, tales of the “Spanish Influenza” filled the pages of The Christian Evangel, the AG's paper of record, later known as the Pentecostal Evangel. In Springfield, Missouri, where the AG had recently relocated, a great outbreak took place. The paper recorded that all AG churches were closed. 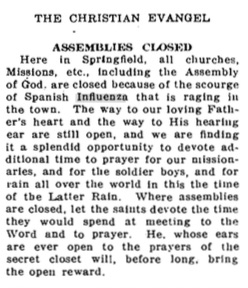 Churches and ministers complied with health department mandates to close their meetings and quarantine those who were sick. They recognized that they needed to protect people in the cities they lived in. On several occasions, ministers canceled revival meetings because influenza was spreading across the town. Some saw the epidemic as resistance to the great work God was doing. Even so, they viewed the painful reality of human mortality as a greater impulse to reach the lost. 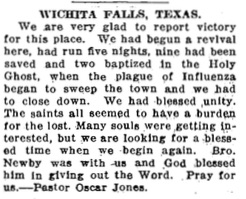 Yet, these believers also went to the homes of those who were sick to pray, and they saw many answers to prayer. They weren’t afraid to pray for the sick. In some cases, they ministered to them even in death, as is illustrated below. 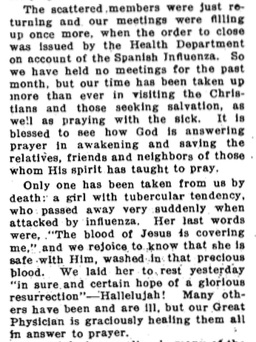 The Christian Evangel published many such accounts from ministers. However, it also included a list of prayer requests on the last page of the paper, many of which were people asking for prayer for themselves or their children because of influenza. Sadly, we can assume that many of those people died.

Yet, the paper also published stories of the triumph of Pentecostal saints who made it through. One particularly important testimony was that of E.N. Bell’s wife, who contracted the influenza virus but was healed. She testified, “The Spirit Himself interceded for me,” and she made it through. 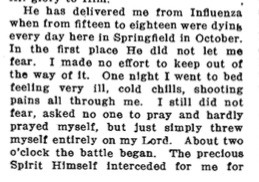 On another occasion, Robert Craig, a notable early Pentecostal leader from San Francisco, shared this testimony that although many died in the city, not one in their mission died from influenza. 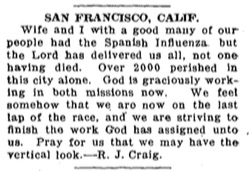 Some of the areas hardest hit by the pandemic were outside the U.S., particularly India. Accounts of the tragic loss of life there filled the paper. One article describes the progression of the sickness, reporting that a person could die in as little as three days. 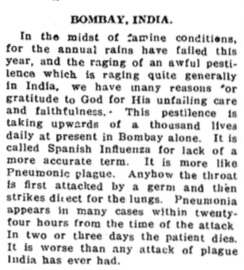 Sadly, many missionaries also died from the pandemic. One in particular, Nellie Andrews Norton, died because of her ministry to people infected with the H1N1 virus. The tribute to Norton published in the The Christian Evangel states: “When the Influenza came into our midst last month, she did not spare herself, but worked night and day caring for the sick until she herself came down with the disease.” But accounts like this always acknowledged that for the believer, death was a “promotion” to heaven for sacrificing their life here on earth.

As Spirit-empowered believers consider how to respond to the current crisis, there are two things to take away from this historical example:

First, early Pentecostals endured the worst flu pandemic to that point in history. Although they believed in healing, they didn’t claim that their faith in God would protect them from the disease. Many caught the flu; some died. Yet, early Pentecostals continued to proclaim that God was a healer, and many were preserved through the flu or healed of it. In either case, they testified that their faith in God and prayer got them through the crisis.

Second, early Pentecostals’ worship and ministry were interrupted by the crisis. Missions were closed. Revivals were canceled. Even the publication of The Christian Evangel was delayed. Yet, early Pentecostals followed the guidelines of the city or health department and closed their churches and missions when instructed to. They were not careless with the lives of people during the pandemic. They were willing to stay home and pray, knowing that that was just as valuable in the crisis.

I don’t know how long churches will be closed or people will suffer during the coronavirus pandemic. However, I know that people of faith have endured in the past and made it through. Our communities may experience tragic losses, but we may also hear dramatic testimonies of healing. We need to pray for one another. We need to encourage one another. We need to care for one another, especially the most vulnerable. But most of all, our churches need to follow the example of those who went before us to keep safe personally and obey the guidelines that keep others safe. If we can do this, we will make it through.