Was America Founded as a Christian Nation?

Few questions in American politics generate as much controversy as the relationship between church and state. On one side are Christian nationalists who contend that the nation was founded on religious principles. On the other side are secularists who argue it was founded on Enlightenment principles. The controversy between them is evident, most obviously, in the seemingly endless First Amendment cases brought before our nation’s courts to determine whether that amendment’s “establishment” and/or “free exercise” clauses have been violated. But behind the evident legal controversy lies the latent historical controversy, in which the same contending parties dispute the facts and significance of the Founding Era.

Was America Founded as a Christian Nation? by John Fea is an excellent introduction to that question and should be read by both Christian nationalists and secularists alike, for it corrects the historical errors both sides commit and draws a balanced portrait of the role religion did (and did not) play in the American Founding.

In the Introduction to the book, Fea—an evangelical historian at Messiah College in Grantham, Pennsylvania—explains why the question the title of his book asks is so controversial, namely, because both sides to the controversy are seeking a “usable past” to buttress their side in contemporary political debates. Historians, he goes on to argue, should avoid such present-mindedness and seek to understand the past on its own, often complex terms.

Fea then unfolds his argument in three parts:

Part Two answers a question: “Was the American Revolution a Christian event?” Chapter 5 shows that both Virginia and Massachusetts colonies were explicitly, legally, and institutionally Christian communities with established churches, but that the nature of their establishments varied widely and their actual practice often fell well short of Christian ethical norms (as, for example, the practice of African slavery and ill treatment of the aboriginal populations). Chapter 6 argues that the intellectual underpinnings of and justifications for the American Revolution were based more on secular Enlightenment ideas than biblical principles. Chapter 7 extends this argument by showing how pro-revolution clergy often read those Enlightenment ideas into their preaching of the Bible, rather than deriving their preachments from biblical principles.

Few questions in American politics generate as much controversy as the relationship between church and state.

Chapters 8, 9, and 10 examine the form of religion that influenced the Declaration of Independence, Articles of Confederation and Constitution, respectively, and note the controversies over religious freedom that gripped the colonies during these years. The God of the Declaration (“nature’s God”) is ambivalent, capable of being recognized by both Christians and Enlightenment theists alike. (For an excellent study of the common theological ground between these two groups during the Founding, see God of Liberty: A Religious History of the American Revolution by Thomas S. Kidd.) The Articles of Confederation left the establishment or disestablishment of religion in state hands, with Massachusetts retaining its established Congregationalism (until 1833) and Virginia disestablishing its Anglicanism through the yeoman efforts of Thomas Jefferson and James Madison, against the contrary efforts of Christian nationalists such as Patrick Henry. Regarding the Constitution, Fea notes the irony that leading Christian nationalists—such as Patrick Henry, again—were anti-Federalists in the ratification debates precisely because the Constitution did not acknowledge the nation’s Christian heritage. And he concludes by discussing what Jefferson’s “wall of separation” did and did not mean at the time.

Part Three investigates the religious beliefs of George Washington (Chapter 11), John Adams (Chapter 12), Thomas Jefferson (Chapter 13), Benjamin Franklin (Chapter 14) and John Witherspoon, John Jay and Samuel Adams (Chapter 15). Of these, only the last three can be considered “orthodox” in Christian doctrine and practice. Fea describes Washington as a latitudinarian Anglican more interested in religion’s social utility than in Christian doctrine or practice. Adams is a “devout Unitarian,” Jefferson a “follower of Jesus” who separated the supernatural husk from the moral kernel of Jesus’ life and teaching, and Franklin as an “ambitious moralist.” They disagreed on doctrine but agreed on one thing: “religion was necessary in order to sustain and ordered and virtuous republic” (a point which Kidd also argues in God of Liberty).

I highly recommend Was America Founded as a Christian Nation? to all readers, but especially to those interested in the debates surrounding the role of religion in our nation’s history and the contentious issues of church-state separation. It is clearly organized, well written, thorough in its research and judicious in its conclusions. It will—or should!—complexify the simplistic historical interpretations of both Christian nationalists and their secularist opponents. Such complexification, I hope, will tamp down the fires of contention and lead to greater cooperation as both religious and secular Americans see their stake in our collaborative national experiment.

The revised edition of Was America Founded as a Christian Nation? features a new cover, corrects mistakes in the previous edition, updates the bibliographies at the end of each section, and includes an epilogue that discusses new developments since the 2011 publication of the first edition. Otherwise, the text is the same as the first edition. 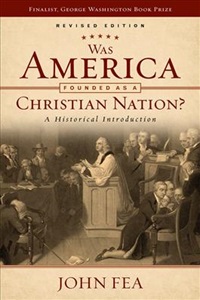