The Psychology of Achievement

Review of 'Grit' by Angela Duckworth 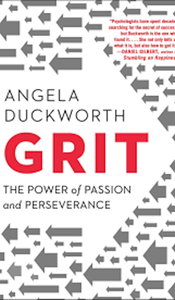 Every year, approximately 14,000 high school juniors apply to the United States Military Academy at West Point. Of these, about 4,000 secure the necessary nomination from a member of the U.S. House of Representatives or Senate  or from the vice president. Of these, around 2,500 meet West Point’s standards for academics and physical fitness. Of these, only 1,200 are granted admission. And among these, approximately 20 percent drop out before graduation. In other words, only 7 percent of high school juniors who apply to West Point actually graduate from it.

Angela Duckworth cites these statistics at the outset of Grit in order to ask a simple question: Why do some people succeed? That question is relevant to military training, of course, but also to a host of other endeavors: business, education, athletics, entertainment, artistry, technical trades, etc. In any field of effort, some people rise to the top. What psychological factors explain their achievement?

A common answer is “genius,” which describes a knack or talent for something. We look at child prodigies and think, They will do great things. Success is simply in their nature. Angela Duckworth thinks the “genius” argument is not helpful. When we focus on natural talent, we begin to think that success in a given endeavor is pre-determined. And we overlook other factors that might be in play.

Why do some people succeed? What psychological factors explain their achievement?

Duckworth is a professor of psychology at the University of Pennsylvania and a 2013 recipient of a MacArthur Fellowship—the so-called “genius grant.” Over the years, she has amassed a growing body of research to indicate that “grit” is more important than “genius” when it comes to determining success. Her book explains what grit is and why it matters (Part I), how to grow grit from the inside out (Part II), and how to grow grit from the outside in (Part III).

First, the definition: Grit is a “combination of passion and perseverance.” Duckworth writes: “no matter the domain, the highly successful had a kind of ferocious determination that played out in two ways. First, these exemplars were unusually resilient and hardworking. [That’s perseverance.] Second, they knew in a very, very deep way what it was they wanted. [That’s passion.] They not only had determination, they had direction” (emphasis in original).

In defining grit this way, Duckworth isn’t knocking the role of genius or talent. She’s simply putting it in a larger context. A genius may fail through lack of grit, whereas a non-genius might succeed through abundance of it. Indeed, her data indicates that grit is a better predictor of success than genius or talent. (The smartest and most physically able West Point applicants did not necessarily make it through to graduation, for example.)

A crucial tenet of grit theory is that grit can be developed. And if it can be developed, then greater levels of achievement can be earned. That brings us to the second part of Duckworth’s book: how to develop grit from the inside out. These chapters focus on the psychology of the would-be achiever. Gritty people have four key “psychological assets”:

Duckworth describes each of these assets using both anecdotes and data, and she offers practical advice for how to develop these assets personally.

The third section of Grit shows how passion and perseverance can be instilled in us through the example and advice of others. Here, Duckworth focuses on the roles that parents, teachers, extracurricular activities, and culture—corporate or team culture, not national culture—can play in growing gritty individuals. There’s sound, practical advice for leaders in these chapters. As a parent, I was particularly drawn to her advocacy of “wise parenting,” which strives to create an environment for children that is both supportive (“I love you”) and demanding (“You can do better”).

Although Grit examines the psychology of achievement from a secular point of view, I cannot help but think, as a minister, that it can shine some light on the ministries of the local church too. In the Pentecostal tradition, we often look for “calling” and “giftedness,” which are the spiritual analogs to “genius” and “talent.” There’s nothing wrong with this, of course, because God does call and gift people for ministry, whether ordained or lay.

The problem is, too often, we only look at those elements. So, we hire the charismatic preacher or the enthusiastic youth pastor or the worship pastor who’s a musical prodigy and are surprised when they crash and burn. Worse, we overlook the less-charismatic preacher or the slow-and-steady youth pastor or the worship pastor who has to work hard to get the song service ready because their “calling” and “giftedness” are less obvious at first glance. Perhaps what we need is a more thorough way of examining grittiness in ministerial candidates, of their passion for and perseverance in ministry over time. The slow burn is far stronger than a flash in the pan.

I thoroughly enjoyed and highly recommend Grit, whatever your context. As a husband, parent, minister, and PhD student, the book kept shining light on areas where I can cultivate greater passion and perseverance regarding long-term goals, and in the process, experience better results. I think you’ll find the book similarly illuminating.