The debate about gender roles between complementarians and egalitarians is one of the most contentious among evangelical Christians. Complementarians believe that God created a hierarchical relationship between men, whose role is to lead in home and church, and women, whose role is to graciously submit to male leadership. Egalitarians believe that the hierarchical relationship between men and women is not God’s creative design but rather the result of the Fall. For egalitarians, Christ’s redemptive work reverses the curse of sin, places men and women in relationships characterized by mutual submission, and frees both men and women to lead as God calls and empowers them.

Among some of the neo-Reformed complementarians affiliated with the Council on Biblical Manhood and Womanhood (CBMW), it used to be acceptable to prove their position not only by appeal to specific biblical texts (e.g., Ephesians 5:21–32; 1 Corinthians 14:34–35; 1 Timothy 2:11–15), but also by appeal to the doctrine of the Trinity. After all, did not Paul write, “the head of every man is Christ, the head of a wife is her husband, and the head of Christ is God” (1 Corinthians 11:3, ESV)?

The debate about gender roles between complementarians and egalitarians is one of the most contentious among evangelical Christians.

Complementarian Jared Moore explained the logic of this argument in his review of Bruce Ware and John Starke’s One God in Three Persons:

If complementarians can prove that there is a hierarchy in the immanent (ontological) Trinity, then they win, for if a hierarchy exists among the Three Persons of God, and these Three Persons are equally God, then surely God can create men and women equal yet with differing roles in church and home.

Thus, complementarians found a way to maintain male-female equality even as they denied that women could be leaders in home and church.

This argument was first articulated by George F. Knight III in 1977. It received institutional expression in the Danvers Statement of 1987, the charter of the CBMW. After that, it was articulated and defended most voluminously by Wayne Grudem and Bruce Ware in numerous books and articles, including Grudem’s Systematic Theology, the most widely used theology text in evangelical seminaries. According to these theologians, to deny fixed role relations between the sexes was tantamount to denying the eternal functional subordination (EFS) of the Son to the Father, thus placing the denier outside the pale of orthodoxy and on “a new path to liberalism,” as the subtitle of Grudem’s 2006 Evangelical Feminism.

I say this argument used to be acceptable among these complementarians because it is now widely recognized — even by many of them! — to be heretical, a corruption of Trinitarian doctrine as formally defined by the councils of Nicea (A.D. 325) and Constantinople (A.D. 381) in the Nicene Creed. (In January 2017, for example, after a yearlong debate about EFS in complementarian circles, CBMW took the extraordinary step of explicitly affirming the Nicene Creed’s definition of the Trinity.) Kevin Giles charts the rise and fall of the complementarian doctrine of the Trinity in his book of that title. Giles is an Australian Anglican minister who has argued against the eternal functional subordination of the Son — the name complementarians gave their Trinitarian doctrine — since the 2002 publication of his book, The Trinity and Subordinationism.

Rise and Fall is an eye-opening, theologically helpful book. Why? Not only because it traces the history of a bad idea, but because it explains how that bad idea became so prominent among some theologians in the first place. Giles points to bad theological method as the culprit.

…the complementarian theologians got the doctrine of the Trinity wrong because they had a wrong understanding of how evangelical theology is “done.” They thought that with the Bible in hand they were free to construct the doctrine of the Trinity with virtually no reference to the historical development of this doctrine or any reference to the creeds of confessions of the church. In their mind, systematic theology was simply a summary by individual theologians of what they thought the Bible teaches on any doctrine. For them, an evangelical who believed in the inerrancy of Scripture had in the Bible the answer to every theological question.

This is where Giles’ book hits close to home. As a Pentecostal, I am neither a Calvinist nor a complementarian. However, this same theological method is prevalent among my tribe. As Protestants, we affirm sola Scriptura, Latin for “by Scripture alone.” In other words, we believe that Scripture is “the infallible, authoritative rule of faith and practice,” as the Assemblies of God’s Statement of Fundamental Truths puts it. So far, so good.

…the complementarian theologians got the doctrine of the Trinity wrong because they had a wrong understanding of how evangelical theology is “done.”

The problem is that we Pentecostals — along with many other evangelicals — often operate as if sola Scriptura meant what Giles calls solo Scripture— “No creed but the Bible!” There’s a huge difference between saying that the Bible is the only infallible source of our theology, however, and saying that it’s the only source whatsoever. As a historical matter, that’s not what the Protestant Reformation meant by sola Scriptura. The Reformers affirmed the orthodox doctrinal tradition of the Church, even as they appealed to Scripture to critique the corrupt traditions of the Roman Catholic Church. They didn’t throw out the Nicene baby with the indulgence bathwater. As we celebrate the 500th anniversary of the Protestant Reformation this October, it might be helpful to keep the Reformers’ theological method in mind.

How that crisis will resolve itself is anyone’s guess, but Giles concludes the book with a quotation by complementarian Calvinist Andrew Wilson: “I’m quite optimistic about the fallout from the whole debate…. I think correctives are good. I think robust challenges to faulty formulations of doctrine will, in the end, produce health rather than decay.

To which this Arminian, egalitarian Pentecostal voices a hearty, “Amen!” 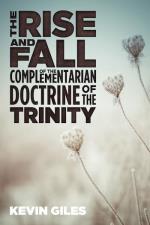 Kevin Giles, The Rise and Fall of the Complementarian Doctrine of the Trinity (Eugene, OR: Cascade Books, 2017).