Patriotism and the Church

We have just celebrated the Fourth of July, and did so in the usual fashion: BBQ, fireworks, family and also America prominently displayed and celebrated in our churches.

Statistically, almost 9 out of 10 Protestant churches did something in their churches for Independence Day. This time of year always draws our attention to the question of patriotism in the church, and the conversation is often heated. Full disclosure: While I am a proud American citizen, as a pastor I typically do not incorporate that into worship services I am leading. But many churches do (including ones I love and respect), and I think it is appropriate for us to explore the state of patriotism in the church and how our understanding of God’s kingdom can inform how we view America in the context of a worship service.

The Confusion: America, God, and the Church

Amongst Protestant pastors, there is overwhelming support and acknowledgement of the Fourth of July having an impact on the normal worship service. Special music, recognitions and ceremony, as well as prominently displaying the American flag, often mark a church’s celebration of America. Six in 10 Protestant pastors say it is important to incorporate patriotic elements to celebrate America in worship during Fourth of July week.

This results in many different ways patriotism is expressed during a worship service. Over 60 percent of the Protestant pastors surveyed include special music, recognition of family members serving and living veterans. These statistics show that celebration of America is of high value to most Protestant pastors. 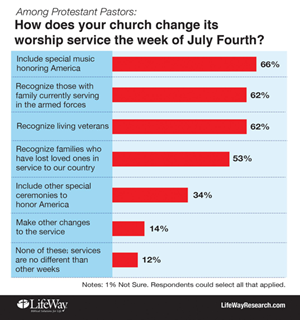 Churches can and do celebrate their county in many wonderful ways — praying for government leaders, expressing gratitude for freedom and highlighting those values that align with scriptural values. However, the following statistic is the one that should give us the most pause: 53 percent of Protestant pastors say, “Our congregation sometimes seems to love America more than God.” Regardless of your view of patriotic worship services, this number should be of concern.

There is a reason why this statistic shouldn’t surprise us, however.

As recently as 60 years ago, the church was the community center, the pastor was the representative of the community and the church building was the largest public gathering hall in town. For hundreds of years, churches were the first buildings erected when a new town or city was formed. It was the geographical and social hub, and everything else was structured around it.

Practically, there simply wasn’t any other indoor gathering space larger than the local church. And this made it instrumental in the forming of the American culture we understand today. Political debates were held in churches, pastors were prominently respected in the community and in the government, and throughout the forming of our nation, America, God and the church coalesced together in a symbiotic relationship. America is perceived to be a Christian nation less because of the founding fathers’ intentional objectives, and more because of the passive role of the local church in shaping American culture.

This complex history has blurred the lines between patriotism and the practice of the church. We often use language that indicates America is God’s chosen nation, that we are special, and that our nation is “Christian.” And, some groups sound like they are confusing God’s chosen people in the Bible (Israel) with America, supposing it to be the modern equivalent. (It’s not.)

The Clarity: Dual Citizenship but One Allegiance

When Paul is writing to the Philippians, he is conflicted about whether it is better for him to stay in this world and serve his brothers and sisters or to leave and go to heaven. The King James version says: “For I am in a strait betwixt two” (Philippians 1:23).

The language is correct, we are in a strait betwixt two opposing worlds, and, in a sense, we have a dual citizenship. As Christians, we are held responsible to submit to our authorities, and we live in this natural world around us, broken but still bearing a semblance of God’s image. Also, as Christians, we are a part of a new kingdom of God, partially present but not yet fully expressed, where Jesus is ruling and reigning and His glory is increasingly known. We are sojourners in the strait betwixt our country and God’s kingdom, and we need clarity on how those two fit together.

To help find that clarity, here are a few points to help us understand dual citizenship and Kingdom allegiance.

Our worship is where we declare our confidence and anticipation toward what will be the most perfect union of all.

First, our country does not have a special relationship with God. In the Old Testament, there was one chosen nation: Israel. God chose a specific nation to bless, but now He has called for himself a new people: Christians. We are now a “chosen race, a royal priesthood, a holy nation, a people for his own possession, that you may proclaim the excellencies of him who called you out of darkness into his marvelous light” (1 Peter 2:9, ESV).

When we fall into the lie that America is God’s chosen or special nation in a spiritual sense, we place America in a position that God does not. God’s chosen, blessed and special people have been established in His Church.

Every country — including the one that we call home — is in the darkness of sin, brokenness and suffering. God is calling His people out of that darkness that we may proclaim Him among all the nations. God loves and chooses people, not countries, under this new covenant.

Third, our allegiance is to the Kingdom. God loves people, not modern countries. His loyalty to us extends beyond time or geographical location, and our loyalty to Him is not for what He gives, but for who He is. We must draw a line in the sand to say that God’s kingdom, and Jesus’ rule and reign in the world are of greater importance than our allegiance to anything or anyone else. We owe God our lives, our souls and our loyalty as followers of Jesus, first and foremost. When our allegiance or alliance is drawn anywhere but toward God, it is dangerously close to idolatry.

The Calling: One Love, Not Two

Our calling is then absolutely clear: We are called to love and serve the King and represent the kingdom of God. That’s our primary duty. We can celebrate our country in this world, but our loyalty should be to the Kingdom that is not of this world.

The facts tell us that many churches celebrated America this past Fourth of July, and we can expect this to continue. Pastors — in a random sample — tell us that many of our members seem to love America more than God. Let us not forget, we are certainly called to love this earthly country He has placed each of us in. But we are a part of a broader family than just a country. We are a part of a global, universal and unchanging Kingdom that is under the rule and reign of Christ. We are His subjects, loyal to Him. Allegiant to Him. Serving Him.

This is what Paul writes as he describes this new family and new Kingdom we are joining:

“There is one body, and one Spirit, even as ye are called in one hope of your calling; One Lord, one faith, one baptism, One God and Father of all, who is above all, and through all, and in you all (Ephesians 4:4–6).

Our mission knows no earthly borders. We have been freed to love others, and that does include the place we call home. But we have also been freed to desire a better country. Our worship is where we declare our confidence and anticipation toward what will be the most perfect union of all.