Why Pastors Should Understand Textual Criticism 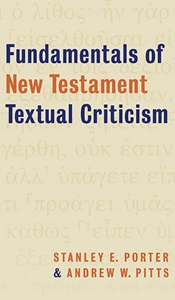 Stanley Porter and Andrew Pitts describe their Fundamentals of New Testament Textual Criticism as a “distinctively midlevel textbook on New Testament textual criticism for interested and serious students and with recent scholarly discussion in pertinent areas in mind.” It is, in other words, a textbook for students in college and graduate school who are majoring in New Testament studies. Why, then, do I think pastors and other Christian thought leaders should read this book too?

To answer that, go back with me to 2003, when Dan Brown published The Da Vinci Code. Although the book is fiction, Brown prefaced it with these words: “All descriptions of artwork, architecture, documents, and secret rituals in this novel are accurate.” Unfortunately, many of Brown’s allegedly “accurate” claims—especially about the Bible, Christian theology, and church history—were simply wrong, sometimes at the most basic, factual level.

Regardless, those claims left an impression on readers. Understandably so! Many readers nodded their heads when Leigh Teabing, one of the book’s characters, said this about the Bible: “Man created it as a historical record of tumultuous times, and it has evolved through countless translations, additions, and revisions. History has never had a definitive version of the book.” In other words, powerful people monkeyed around with the text of the Bible in order to confer divine status on their preferred ideology.

Two years later, Bart D. Ehrman published Misquoting Jesus: The Story Behind Who Changed the Bible and Why. Unlike Brown, who is a novelist, Ehrman is James A. Gray Distinguished Professor of Religious Studies at the University of North Carolina at Chapel Hill. In Misquoting Jesus, Ehrman wrote, “There are more variations among our manuscripts than there are words in the New Testament.” And one of the reasons for that is what Ehrman elsewhere calls “the orthodox corruption of Scripture.” In other words, the orthodox altered the text of the New Testament in order to give themselves a “biblical” weapon to use against heretics.

Now, imagine that you are a well-meaning Christian and you read The Da Vinci Code. It raises questions about the accuracy of the New Testament text. Your pastors say it’s bunk, but then you read Misquoting Jesus, and you start to wonder whether they know what they’re talking about. And then you start to wonder whether the Bible itself is trustworthy.

Notice how quickly a fictional narrative can lead to a factual question with serious spiritual implications. Pastors who are unaware of the questions percolating in popular culture and unprepared to provide serious, well-thought-out answers to them are not serving members of their congregation well. At some level, then, pastors must know how to answer the kinds of questions raised by Dan Brown’s and Bart Ehrman’s statements.

Which brings me back to Fundamentals of New Testament Textual Criticism. In this book, Porter and Pitts provide readers with a nuts-and-bolts explanation of that discipline. They define the goal of textual criticism as the “reconstruction of the original the [New Testament] documents based upon the manuscript traditions currently available.” They then walk readers through major witnesses to the New Testament text and the various text-types that arose over the centuries. They define what a textual variant is and outline how external and internal evidence help decide what the original text most likely said. They then conclude with their discussion with several chapters on modern critical editions of the Greek New Testament, as well as translations of it into English.

With the exception of a brief (and to my mind, conclusive) refutation of Bart Ehrman’s orthodox-corruption-of-Scripture thesis, the tone of the book is introductory rather than apologetic. Nonetheless, their introduction of the discipline of textual criticism has apologetic implications. If we can recover the original text of the New Testament with reasonable confidence, then we can be reasonably confident that it has not been corrupted for political (Dan Brown’s point) or theological (Bart Ehrman’s point) purposes. In other words, when we read the New Testament, we have access to the worldview, beliefs, and practices of Jesus’ earliest disciples. I would further argue that in having access to them, we have access to Him.

Again, Porter and Pitts do not make these apologetic points. Their focus is on introducing the discipline to students, and they do this well and objectively. Anyone interested in the textual criticism of the New Testament thus will find accurate information here. Still, as a minister, I can’t help but think that this introduction is capable of inoculating readers against certain viruses of the mind about the Bible contained in both pop culture and certain academic quarters.