Reading the Biblical Text in Its Original Context

Review of 'Windows into the Bible' by Marc Turnage 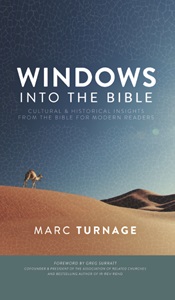 Marc Turnage, Windows into the Bible: Cultural and Historical Insights from the Bible for Modern Readers (Springfield, MO: Logion Press, 2016).

“The past is a foreign country,” wrote British novelist L. P. Hartley; “they do things differently there.” We modern Bible readers would do well to keep Hartley’s dictum in mind. Why? Because the question, “What did the Bible mean?” takes precedence over the question, “What does the Bible mean for me?” We cannot correctly apply biblical wisdom to our lives until we understand what the Bible said in its original context.

Windows into the Bible by Marc Turnage looks at the Bible’s original meaning through four “windows”: spatial, historical, cultural, and spiritual. Turnage is not systematic and exhaustive in his treatment of these issues. In other words, he does not offer a complete introduction to the spatial, historical, cultural, and spiritual world of the Bible. Rather, he is episodic and illustrative. After introducing the four “windows” concept, he provides 28 examples of how these ways of looking at the Bible should shape (and in some cases reshape) our understanding of it.

Chapter 1, “The Land Between,” describes the geography of ancient Israel. Turnage writes: “[Israel] functioned as a strategic land bridge connecting the continents of Asia and Africa.” It was a crucial trade route between these areas, but it was also the battleground of the dominant empires of those areas, Mesopotamia and Egypt. “Because of its strategic location, the land of Israel never existed in isolation” from the nations surrounding them. Or existed in peace. Unlike Mesopotamia and Egypt, Israel also had no major river to supply water for consumption and irrigation of farmlands. (If you’ve ever seen the Jordan, you know what I mean.) It depended heavily on rain. It was in this “classroom” that God taught Israel obedience to and faith in himself.

Chapter 7, “Armageddon: The Mountain of the Assembly,” argues that Armageddon (Revelation 16:16) is Jerusalem, not Megiddo in the Jezreel Valley. I have taken several tours of the Holy Land with Turnage, and this is always an argument that catches other Christian tourists off guard. “Doesn’t Armageddon mean ‘the mountain of Megiddo’ in Hebrew?” they ask. By way of an answer, Turnage points to two “principal issues”:

(1) The biblical site of Megiddo…ceased to be inhabited in the fourth century BC. By the end of the first century AD, when John composed [Revelation], the site…was unknown. (2) Jewish apocalyptic speculation never placed the topographical location of the end-of-days battle in the vicinity of the biblical site of Megiddo; rather, the eschatological (end-of-days) battle took place in the environs of the ‘beloved city’ (Rev. 20:9, Rev. 11:2)—Jerusalem.

What, then, does Armageddon mean? It can’t mean “the mountain of Megiddo,” since Megiddo is a tel, not a mountain. Instead, it seems to be the Greek transliteration of the Hebrew phrase, har mo’ed, “mountain of assembly.” This phrase appears in Isaiah 14:13, which describes the intention of the king of Babylon “to ascend the mountain of God, seating himself in God’s stead at the end of days.” Revelation 16 describes the battle between God and “the kings from the East” (i.e., Babylon), who are pretenders to His throne. Turnage uses this Hebrew phrase, har mo’ed, to open a window onto the eschatological beliefs of Jews in the days of Jesus. It’s fascinating stuff.

“The past is a foreign country: they do things differently there.” ~L.P. Hartley

A final example: In chapter 9, “The Pharisees and the New Testament,” Turnage writes: “the negative stereotype given to the Pharisees affects how Christians read and understand them in the Gospels and Acts. At the least, this produces poor and faulty interpretation of the biblical text, but more problematically, it continues to foster Christian anti-Jewish attitudes that penetrate preaching and teaching.”

Now, there is no doubt that Jesus criticized the Pharisees, sometimes in harsh terms (e.g., the “woes” of Matthew 23:1–36). Turnage doesn’t downplay that element of Jesus’ teaching. But he places it in historical context: “when read within the context of contemporary Judaism, we find the same anti-Pharisaic polemic within rabbinic literature, which reflect the world and beliefs of the Pharisees.” In other words, Jesus’ critique of the Pharisees was similar to the Pharisees’ critique of misguided souls in their own movement. “While Jesus probably was not a member of the party of the Pharisees, His faith and piety expressed itself within the broader stream of Pharisaism.”

This “broader stream” explains certain under-emphasized facts about the Pharisees in the Gospels. For one thing, Jesus began the “woes” of Matthew 23 with a recommendation of their teaching: “The teachers of the law and the Pharisees sit in Moses’ seat. So you must be careful to do everything that they tell you” (vv. 2–3a). It is their personal hypocrisy He criticizes: “But do not do what they do, for they do not practice what they preach” (v. 3b). For another thing, they warned Him against Herod Antipas (Luke 13:31). Furthermore, Turnage argues that a close reading of the Gospel accounts indicates that it was the Sadducees in the Sanhedrin who sought to execute Jesus, not the Pharisees (e.g., Mark 15:1). Indeed, the men who buried Jesus, were Pharisees: Joseph of Arimathea probably and Nicodemus certainly (John 19:38–42, cf. 3:1). (By the way, Jewish sources identify Nicodemus as Naqdimon ben Guryon.) Pharisees appear in Acts on four occasions: 5:34, 15:5, 23:6–9, and 26:5. They defend believers on two occasions (5:34, 23:6–9), in the latter case because of the two groups’ common believe in resurrection. The other two occasions indicate that Pharisees had become believers in Jesus (15:5, 26:5). These positive connections between Jesus’ followers and Pharisees in the Gospels and Acts refute simplistic denunciations of the Pharisees. The reality is more complex.

In a work of this size and scope, readers will no doubt find points of detail where they disagree with the author or are challenged by him. I certainly did. In those cases, it’s helpful to remember that the Bible is infallible but its commentators aren’t. What Windows in the Bible forces readers like me to examine is whether on these detailed points of disagreement, our disagreements with the author are based on sound biblical study or just on interpretive traditions. Turnage challenges a number of traditional interpretations, to be sure, but he’s always driving us back to the sacred text in its original context. That’s a good thing, right?

One final note: Marc Turnage is director of the Center for Holy Lands Studies of the Assemblies of God. If you want to understand the Bible, reading this book is helpful. Traveling to Israel with CHLS is even better.