Review of ‘Stay the Course’ by Wilfredo “Choco” De Jesus 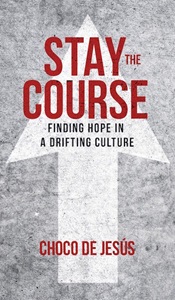 A recent news report carried the headline, “Evangelicals feel alienated, anxious amid declining clout.” It chronicled the foreboding that theologically and socially conservative Christians feel as they survey changes taking place in American culture. Two such changes are the rapid decline of religious affiliation and the equally rapid increase in support for same-sex marriage. Baptist missiologist Ed Stetzer described the sense of unease among evangelicals with a sports metaphor: “We’ve lost our home field advantage.”

Stay the Course by Wilfredo “Choco” De Jesus is written for those anxious Christians. Subtitled “Finding Hope in a Drifting Culture,” it outlines how Christians should respond to these radical changes:

“As we hold fast to God and his purposes, we won’t quietly accommodate the destructive currents of our culture, we won’t react in anger to oppose people who disagree with us, and we won’t withdraw out of hopelessness and despair. Instead, we’ll trust in the matchless love, wisdom, and strength of God to engage the people and causes around us, and we’ll shine in the darkness.”

Pastor Choco has a unique platform to speak this message. He is pastor of New Life Covenant Church, a multicampus megachurch in downtown Chicago. In addition to straightforward Pentecostal worship and preaching, the church is characterized by an active social ministry to the poor, addicts, prostitutes and gang members. As a Hispanic evangelico, he is part of a movement whose numbers and influence are waxing, not waning. At various times, he has been proposed as a candidate for political office in the city of Chicago and the state of Illinois. No wonder TIME magazine proclaimed him one of the world’s 100 most influential people in 2013!

Choco’s optimism about the ability of the Church to affect the direction of American culture is not merely a reflection of the success of his ministry, however. Rather, it is rooted in his deep conviction that Christians’ identity and purpose are found in Christ, not in culture. This is the stable ground in a drifting culture. He writes:

"God has called us to respond with truth and grace, not one or the other."

“Make no mistake: the world is changing, and the culture is drifting away from the values we’ve held dear for generations. We live in a challenging age, but no more challenging than the first century when Rome ruled the world and Christians were often in a persecuted minority. They trusted God for wisdom and courage to face economic loss and government opposition, and the church prospered because of their faith. Difficulties and threats are dividing lines in the lives of believers: we either go deeper into the reality of our King’s love and purpose, we give up on him, or we blindly fight back against the tide that threatens us. God has called us to respond with truth and grace, not one or the other.”

Recently, I had the privilege of interviewing Pastor Choco for a forthcoming episode of the Influence Podcast and then driving him to the airport to catch his flight back to Chicago. If I could, I’d get every anxious pastor I know into a car with him for 30 minutes just to soak up his gospel-saturated optimism. Since I can’t do that, I’ll simply recommend reading this book.