Review of ‘The Bible in America’ by Barna Group 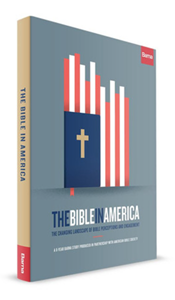 First, the good news: “Americans hold the Bible in high regard.” Eighty-one percent of them consider it a “holy book.” Sixty-eight percent think it’s a “comprehensive guide to a meaningful life.” Fifty-one percent believe it has “too little” influence on American society. Among U.S. adults, 49 percent of men and 59 percent of women consider the Bible either the “actual word of God” or the “inspired word of God.” In both cases, they believe the Bible is inerrant.

Switching from beliefs about the Bible to engagement with it, Barna reports: “More than half of the U.S. population is engaged with or friendly toward the Bible. The term Bible engaged describes a person who “has a high view of Scripture and reads the Bible four or more times a week.” Seventeen percent of American adults fit this description. The term Bible friendly describes a person with “a high view of Scripture but who reads it less frequently.” Thirty-seven percent of Americans fit into this category.

Here’s the bad news, which Barna president David Kinnaman outlines in his introduction to the report:

Barna’s conclusions track with what other researchers are finding. For example, “increasing skepticism” correlates with what the Pew Forum on Religion and Public Life describes as the “rise” of the “Nones,” i.e., adults who have no religious affiliation. Both increased skepticism and decreased religious affiliation are more noticeable in younger generations (e.g., Millennials) than in older generations.

Similarly, the “new moral code” of “self-fulfillment” tracks with what sociologist Christian Smith refers to as “moralistic therapeutic deism.” Americans, even younger Americans, believe in God. However, the god they believe in basically wants people to be nice (“moralistic”) and happy (“therapeutic”). In such a culture, Jesus’ statement about denying oneself, taking up one’s cross, and following Him (Matthew 16:24) doesn’t resonate with many.

Both increased skepticism and decreased religious affiliation are more noticeable in younger generations than in older generations.

Kinnaman doesn’t describe “digital access” as bad news. I do. Greater access to the Bible is indisputably good news. It’s the easy access to “everything else”—including skeptical information about the Bible and a media saturated with messages about self-fulfillment—that worries me. Perhaps we should say that digital access is ambivalent, good or bad depending on how it is used.

So, on the one hand, a majority of Americans hold high views of the Bible and are “engaged” with or “friendly” toward it. On the other hand, a rising number of them dispute its divine origins and/or don’t engage with it at all. This is the contemporary cultural context in which Christians live and serve.

Barna concludes its report with ten “insights to propel [readers] to prayer and action.” Let me cite just two.

First, priority should be given to reaching younger generations. “Without intervention, the future of Bible engagement is less bright than the past, and there is no clearer portrait of this reality than the Millennial generation. Although Millennials Christians continue to stoke a bright flame of passion for the Scriptures, their numbers are dwindling and their non-believing and non-practicing peers have put the Bible on a dusty shelf.” To prioritize their concerns requires taking their hard, skeptical questions seriously. It means showing how the Bible addresses their concerns—for justice, for example—in a meaningful, substantive way.

Second, “digital tools are tools, not magic bullets.” Too many churches and Christian leaders think they can reach younger generations with lights, sounds, and a digitally hip ambience to church. The problem with this line of thinking is that the club down the street has a better audiovisual setup. Applied to the Bible, yes, the available digital tools are amazing. But skeptics have good digital tools too. Churches should use digital tools—for worship and for Scripture study—wisely. But they should also remember that tools are just that: means to an end, a method for achieving a solution. They’re not the end or the solution themselves.

The Bible in America was commissioned by the American Bible Society and draws on what Kinnaman describes as “one of the largest sets of aggregate data [Barna] has ever collected on any single topic.” It’s an eye-opening, suggestive report, and if you’re a pastor or church leader, I recommend that you read it.

Check out the Influence Podcast on The Bible in America with George P. Wood and David Kinnaman