Christian History Around the Globe

Derek Cooper, author of "Introduction to World Christian History" makes the case that Christianity does not belong to Europe or America any more than the wind can be captured, claimed and bottled. 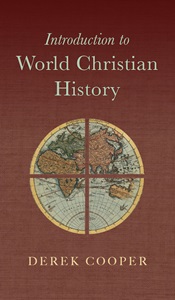 Derek Cooper begins his Introduction to World Christian History with a thought-provoking quote:

"In just over 100 years, the map of world Christianity has changed almost out of recognition. In 1900, it is estimated that 70 percent of all Christians were to be found in Europe … whereas … by 2025 Africa and Latin America will be vying with one another to claim the most Christians, having about a quarter each of the world’s Christian population (p. 11, quoting Sebastian Kim and Kirsteen Kim, Christianity as a World Religion)."

Given this monumental demographic shift, Christianity must be understood broadly as a global movement, rather than narrowly as a Western one.

Unfortunately, too many evangelical histories of Christianity continue to evince a Eurocentric bias in their presentation. (The same can be said of other Christian traditions too, of course.) They trace the Church’s story from first-century Judea (where the Church was born) to fourth-century Rome (where orthodoxy formed a problematic relationship with the State) to medieval Europe (where Catholic Christendom flourished) to early modern Northern Europe (where the Reformation took root) to Enlightenment-era Britain and America (where evangelicalism began) to today—that is to say, they trace the history from “them” to “us.” That story is true, as far as it goes, but it leaves a lot of vital information out, about both past and present realities of the Church.

The emerging field of “world Christian history” or “global Christian history” seeks to correct this Eurocentric bias and provide a more accurate history of the development of Christianity. “Despite its close connection to the West today, Christianity has always been a global and ethnically diverse religion,” Derek Cooper writes. “The time has come for the church to recognize that its history extends far beyond the Western hemisphere. The church was planted in Asia, nurtured in Africa and harvested worldwide” (p. 13).

A thorough history of world Christianity would be a multi-volume affair. See, for example, Dale T. Irvin and Scott W. Sunquist’s projected World Christian Movement, whose first two volumes total 1,000 pages, with a third volume still awaiting publication. Even readers with an interest in the topic do not always have the time or patience to read long books like those. They should begin, instead, with Cooper’s Introduction to World Christian History, which summarizes the main points of world Christian history in less than 250 pages.

Cooper arranges his narrative chronologically and geographically. Chronologically, he divides his material into “three fluid periods: (1) the first to seventh centuries, (2) the eighth through fourteenth centuries, and (3) the fifteenth to the twenty-first centuries” (p. 16). Geographically, he divides his material using the United Nations Geoscheme for Nations. Part 1 and 2 examine the development of Christianity in Asia, Africa, and Europe during the church’s first fifteen centuries. Part 3 begins in Europe, which is where Christianity had become spiritually and politically dominant, but then traces the Church’s development into new fields in Latin America, North America, Oceania, Southern Africa, and Asia. The Church’s development in this period coincided with European colonialism, which—paradoxically—constituted both an obstacle to the acceptance of Christianity by the indigenous peoples (because it was associated with foreign domination) as well as the catalyst for its growth (because indigenous peoples took the missionaries’ gospel and made it their own).

Reflecting on this history, Cooper concludes his book with words that are worth quoting:

"Christianity does not belong to Europe or America, or to Asia or Africa or Oceania any more than the wind can be captured, claimed and bottled. The wind [of the Holy Spirit] continues to blow today, just as it did in the past. We can hear the sound of it and witness how it transforms peoples and cultures. But we do not know how long the wind will remain with us and where it will go next (p. 244)."

Wherever the Wind may blow, Christians should pray and work so that the Wind carries them along with it.