Review of 'Does God Love Everyone?' by Jerry L. Walls

The past two decades have witnessed a resurgence of Calvinism among American evangelicals. This resurgence is especially evident within the Southern Baptist Convention, which historically has been and still is divided over the issue. However, it has also made its presence felt in Pentecostal denominations such as the Assemblies of God, which do not have historic ties to Calvinism.

By Calvinism, I mean specifically the doctrine of salvation that is commonly explained by means of the acronym, TULIP:

In the seventeenth century, Jacob Arminius—a Dutch Reformed theologian—set forth a different understanding of salvation that has been called Arminianism after him. It is sometimes explained by means of the acronym, FACTS:

In Does God Love Everyone? Jerry L. Walls—an evangelical philosopher—outlines an argument against Calvinism and for Arminianism. Its strength is that it focuses on the central point of the disagreement between them. Walls writes:

The deepest issue that divides Arminians and Calvinists is not the sovereignty of God, predestination, or the authority of the Bible. The deepest difference pertains to how we understand the character of God. Is God good in the sense that he deeply and sincerely loves all people?

According to Walls, the answer of Arminianism is “Yes.” The answer of Calvinism is “No.” As Calvinist author Arthur W. Pink put it in The Sovereignty of God: “When we say that God is sovereign in the exercise of His love, we mean that He loves whom he chooses. God does not love everybody…” Walls argues that Pink’s statement is characteristic of Calvinism, even if it’s stated with a bluntness uncharacteristic of most Calvinists.

A god who can save all but chooses not to is not the God whom the Bible reveals.

To see why this is so, consider the argument Walls makes:

Clearly, this set of propositions contains a contradiction between 2 and 6. Both Calvinists and Arminians affirm 2, however. They’re not universalists, in other words. Similarly, both affirm 4.

So, how do they resolve the contradiction? Arminians do so by denying 5. They deny, in other words, that grace is irresistible.

Irresistible grace is part and parcel of Calvinism, however. It’s the I in TULIP. That means Calvinists must deny either 1 or 3. That is, they must deny either that “God truly loves all persons” or that “Truly to love someone is to desire their well-being and to promote their true flourishing as much as you properly can.” As noted above, Arthur W. Pink clearly denied 1. (Walls quotes Calvin himself to similar effect.)

Contemporary Calvinists rarely deny 1, however. Instead, they affirm that God truly loves all persons. For example, D. A. Carson affirms that God loves everyone in the sense that He exercises “providential love over all that he has made” and adopts a “salvific stance toward his fallen world.” However, Carson denies that God gives everyone the “particular, effective, selecting love toward his elect.” It’s hard to square this “love” for “all persons” with the definition of love in 3. A God who could but chooses not to bestow “particular, effective, selecting love” on everyone does not “truly” love them because He does not seek their eternal “well-being” and “true flourishing.”

Walls suggests one further wrinkle when he discusses John Piper, probably the best known Baptist Calvinist. Walls argues that Piper denies 5, not by ditching “irresistible grace” but by suggesting that God has a “greater value” than salvation. Such as what? Piper writes, “The answer the Reformed give is that the greater value is the manifestation of the full range of God’s glory in wrath and mercy (Rom. 9:21–23) and the humbling of man so he enjoys giving all credit to God for his salvation (1 Cor. 1:29).” Because of this “greater value,” it seems that Piper denies God “could give all persons ‘irresistible grace’ [to be saved].” Some evidently must be condemned for God’s glory.

In order to maintain God’s sovereignty in election then, or to promote God’s glory, Calvinism denies that God loves everyone in the truest sense. Like Walls, I find this denial difficult to swallow. A god who can save all but chooses not to is not the God whom the Bible reveals, a God who is love (1 John 4:8).

Walls’ book is a brief outline of a much larger argument. Those looking for a more detailed argument should pick up his Why I Am Not a Calvinist, coauthored with Joseph R. Dongell. But that argument, even in outline form here, is difficult to rebut, as far as I am concerned. 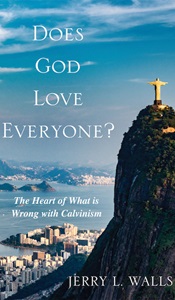 Book Reviewed: Jerry L. Walls, Does God Love Everyone? The Heart of What Is Wrong with Calvinism (Eugene, OR: Cascade, 2016).