Review of ‘The Nones’ by Ryan P. Burge

The General Social Survey (GSS), sorts Americans into seven religious traditions (RELTRAD): evangelicals, mainline Protestants, Black Protestants, Catholics, Jews, other faith traditions, and nones. Between 1972 and 2018, only two of the RELTRAD categories grew: others, from 3.9% to 6.2%, and nones, from 5.1% to 23.7%. The Cooperative Congressional Election Survey (CCES), which has a larger sample size than GSS, puts the nones’ number higher at 31.3%.

The big picture of America’s changing religious landscape, then, is the rise of religious disaffiliation and the decline of Christian affiliation in the U.S. population.

Ryan P. Burge adds considerable detail to this big picture in his new book, The Nones. He is an assistant professor of political science at Eastern Illinois University and an American Baptist Church pastor.

The big picture of America’s changing religious landscape is the rise of religious disaffiliation and the decline of Christian affiliation in the U.S. population.

As a political scientist, he describes how religious affiliation is measured (chapter 1), explains why religious disaffiliation is rising (chapter 2), details the nones’ demographic characteristics (chapter 3), and demonstrates the diversity of beliefs and life experiences among the nones themselves (chapter 4).

As a Baptist minister, Burge concludes his book with two practical suggestions for Christian churches that want to effectively minister to nones (chapter 5).

The first is to listen better. Unfortunately, too many churches put nones in a box, both ideologically and methodologically. The problem with these boxes, Burge writes, is that “to belittle, minimize, or try to explain away the stories of those who walked away or never connected to a church home is to fail to understand that not everyone comes to faith in the same way we did, and people do not stay (or leave, or stay away) for the same reasons we do either.”

For example, churches should not assume that the religiously disaffiliated are hostile to Christian faith. The largest group of nones are not people who claim the labels “atheist” or “agnostic,” but people who say their religious preference is “nothing in particular.” As Burge explains in chapter 4, “The data indicate that one in six of them will move back toward a Christian tradition over a four-year period.”

If you want to evangelize the nones strategically, then, don’t focus your efforts on atheists and agnostics. Instead, focus on the nothings-in-particular because they’re persuadable. You’ll only know that if you listen to them, however.

Burge’s second suggestion is to be less partisan. Religious disaffiliation has many causes, but as Burge demonstrates in chapter 2, the increasingly partisan affiliation of white Protestants offers “the best and clearest explanation for the rapid rate of religious disaffiliation.” To state the matter simplistically, if Christianity is Republican, Democrats will not be Christians. (The same is true in reverse, too, of course.)

Burge does not advise pastors and other church leaders to remain silent on the pressing issues of the day, however. “If pastors don’t give congregations guidance on how to think about politics, then they will get it from somewhere else,” he warns. Instead, he offers this counsel: “speak Truth to them. Preach sound biblical doctrine that cuts across the political spectrum.”

He cites the doctrine of the image of God (imago Dei) as an example of a spectrum-cutting doctrine: “It teaches that neglecting the poor is a violation of imago Dei, and it also teaches us that we should value the lives of the unborn.” The problem with partisan Christianity, it seems, is that it fails to apply gospel values across the entire range of issues American society faces.

Religious disaffiliation shows no signs of stopping, and it is especially prevalent among younger generations. Consequently, I recommend The Nones to pastors and other church leaders who are trying to make sense of America’s increasingly secular character. As Burge puts it, nones are “the largest mission field in the United States today.” 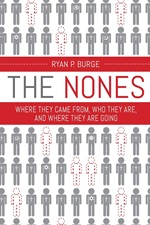 Ryan P. Burge, The Nones: Where They Came From, Who They Are, and Where They Are Going (Minneapolis, MN: Fortress, Press, 2021).